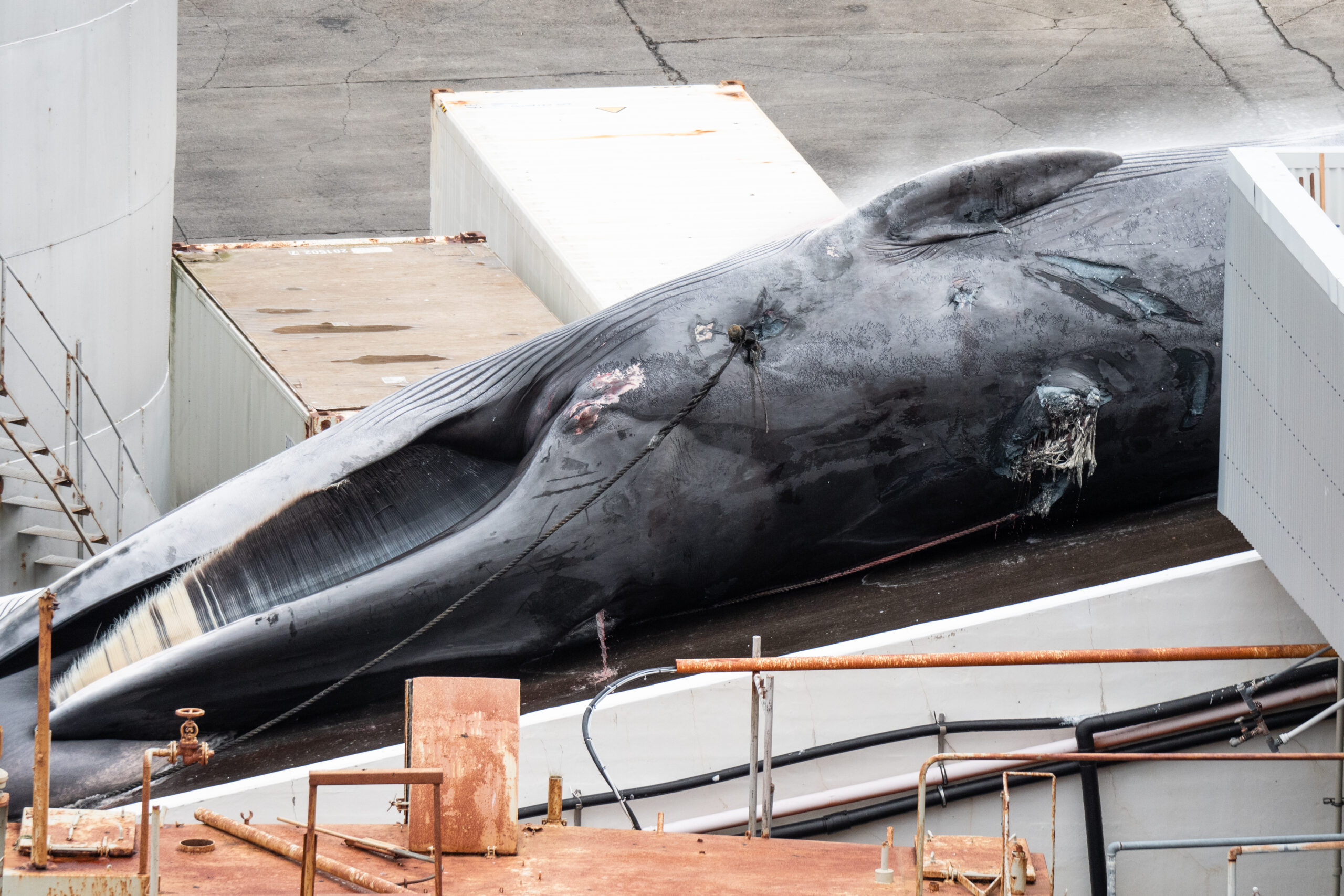 The landing of a female fin whale in the morning hours of July 19 has revealed another case of malfunctioning whaling equipment during this year’s hunting season. One of the whales that was brought to shore by catcher ship Hvalur 9 quickly gained the attention of conservationists who monitor the processing of the large marine mammals at the whaling station in Hvalfjörður.

“This is the second time in two weeks that our team has documented a case of an undetonated harpoon grenade. The gunner of the harpoon ship Hvalur 9 clearly failed to deliver a fatal first shot. A second harpoon penetrated the back of the animal. We have to assume that a second strike was necessary to end the animal’s prolonged suffering,” says Arne Feuerhahn, CEO of marine conservation organisation Hard To Port.

“In addition to the visible harpoon strikes, another, much smaller wound above the animal’s right pectoral fin raises questions. At first sight, it appears to be a bullet hole. We will get a second opinion on this before we can draw a conclusion,” Feuerhahn continues.

He unscrewed the harpoon grenade in the presence of some of his staff and took it aside.

Penthrite grenades need to detonate in the thorax, thoracic spine, neck or brain to ensure a quick or instant death of the animal.

If the device fails to explode, the harpoon cannon usually needs to be reloaded for an additional shot.

“We are witnessing and documenting obvious and repeated violations of the Animal Welfare Act. Our footage clearly indicates that not all whales are ‘killed quickly and painlessly’ during these hunts. We are calling on the Minister of Fisheries and Agriculture to suspend the hunting season until these cases can be properly investigated.” Feuerhahn states.

The organisation Hard To Port has documented most of the fin whale landings of the 2022 season and has repeatedly pointed to evidence of irregularities that suggest that the whaling operations do not always comply with existing animal welfare regulations. On 4 July 2022, the first case of a dud grenade was documented and brought to the attention of the public and media. 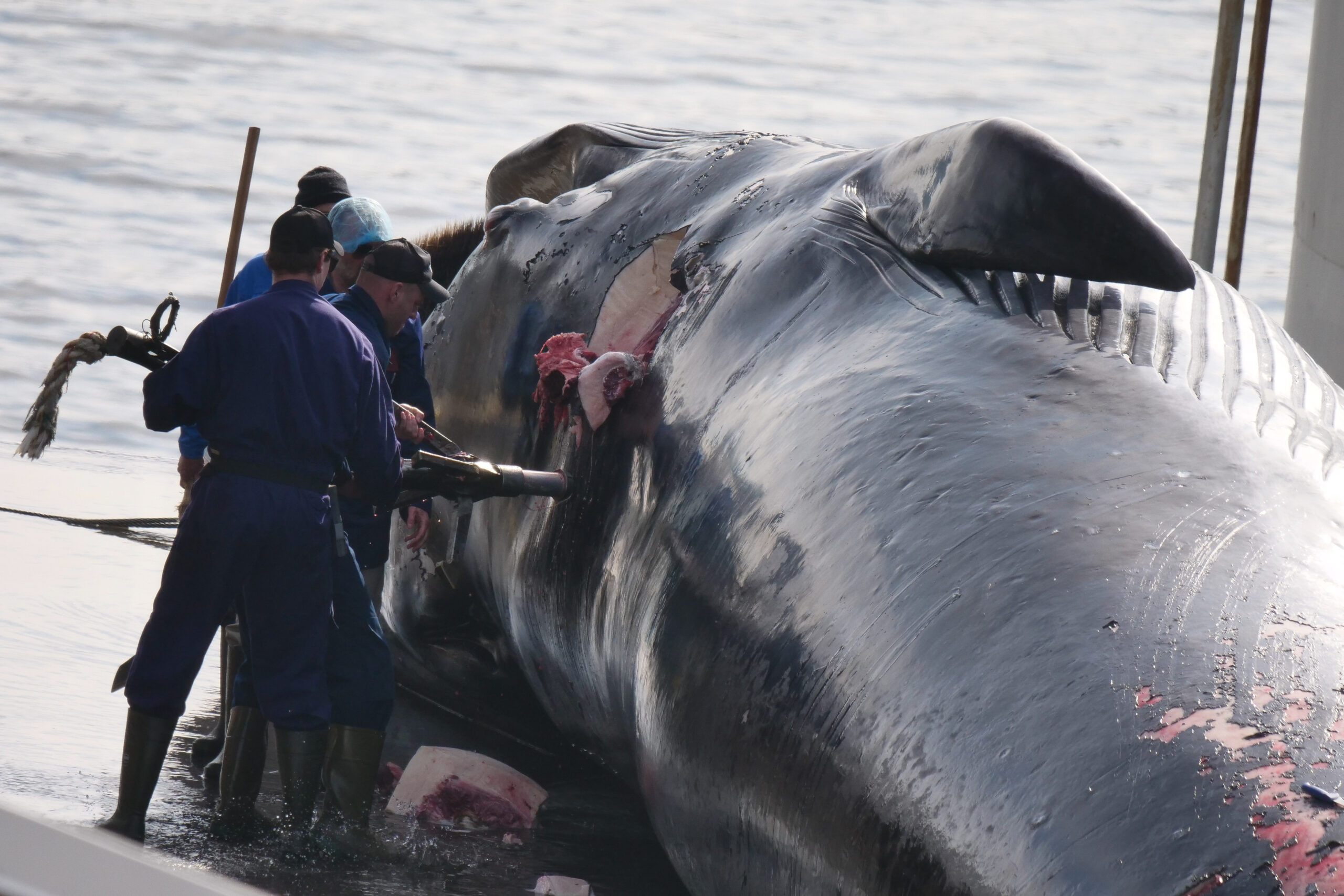 The landing of a female fin whale in the afternoon of July 4th has confirmed concerns about animal welfare violations during Iceland’s whale hunt.

One of the two animals that were caught by Hvalur 9 had a harpoon visibly stuck in its side. The harpoon with a malfunctioned penthrite grenade was quickly removed by workers of the whaling station.

“The penthrite grenade is meant to detonate deep inside the animal to ensure an instantaneous death of the whale. Today’s documented case confirms that these devices seem to be unreliable. The TTD (Time to death) for this animal remains uncertain. A malfunctioned grenade rules out a quick death of the animal – it most likely went through a lot of suffering” says Arne Feuerhahn, CEO of marine conservation organisation Hard To Port.

A study on the killing efficiency in the Icelandic fin whale hunt (2015) describes the effect of the explosive material as follows:

“Penthrite has proven to be very efficient to render whales unconscious and/or dead almost instantly by producing pulses of “shock” and pressure waves that travel spherical (in all directions) at hypersonic speed causing severe damage to vital organs.”

“We are only two weeks into the 2022 whaling season, which started on 22nd of June, and we have already witnessed and documented animals who had been harpooned twice, whales with their heads pierced by a harpoon and now this case of a dud grenade. How many whales have to suffer until the Icelandic government takes a closer look into these obvious animal welfare offenses?” Feuerhahn continues.

“It seems commercial whalers here in Iceland get a free pass to everything. I would like to ask the Minister of Food, Fisheries and Agriculture Svandís Svavarsdóttir to monitor these operations and put them under scrutiny. Whales fascinate thousands of visitors here in Iceland, their presence secures lots of jobs and contributes to a thriving and profitable tourism sector. These animals need to be given some respect” Feuerhahn concludes.

After the whale was processed in a several hour long procedure, the second animal followed in the late evening. 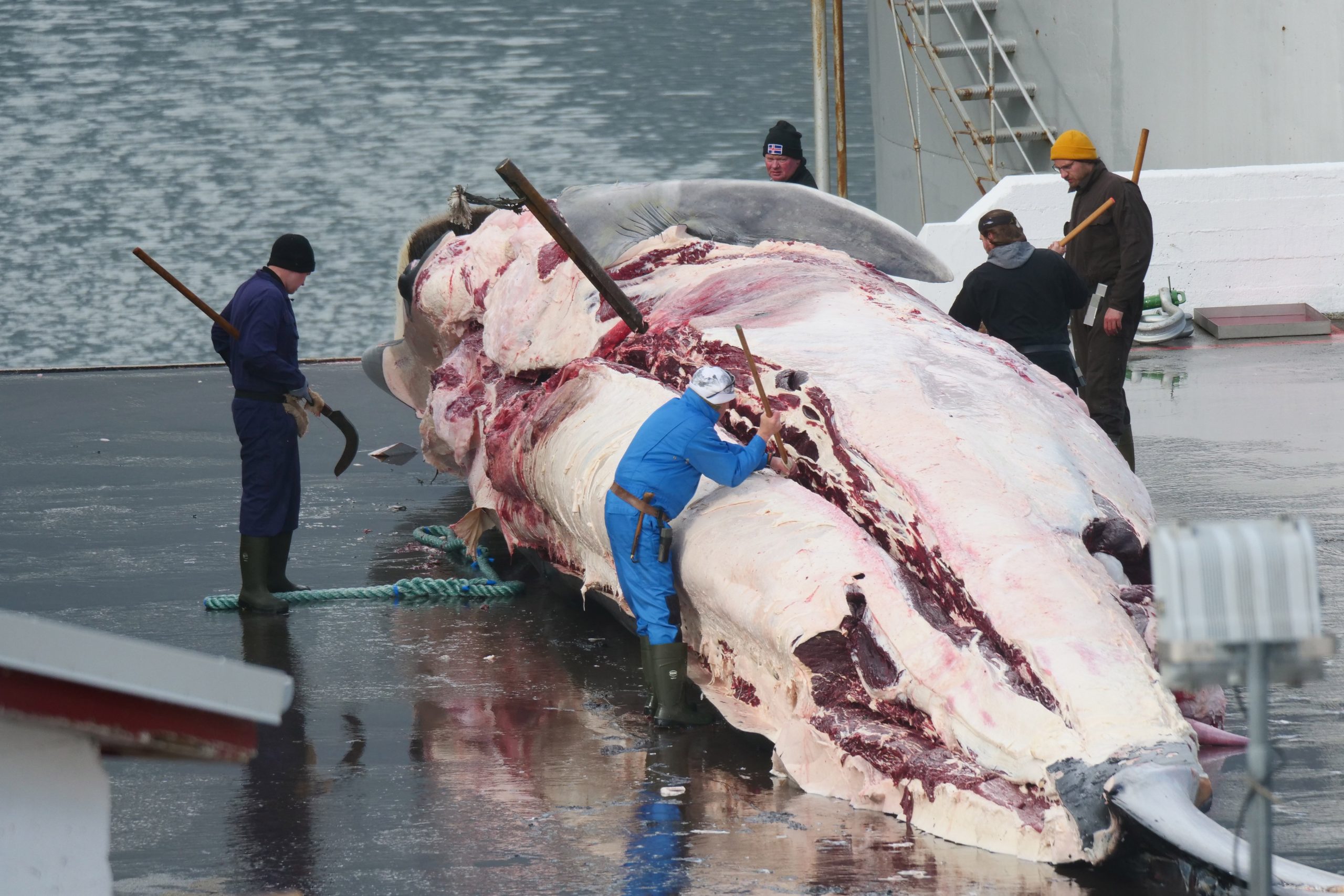 “Today is a sad day for whales and efforts to protect the oceans”, says Arne Feuerhahn of marine conservation organisation Hard To Port as he witnesses the first fin whale of the 2022 whaling season being landed at the processing factory in Iceland’s whale fjord. The harpoon ship Hvalur 9 returned on Friday morning with a male fin whale tied to its side.

“Sadly, we are witnessing the continuation of a wealthy person’s disturbing hobby – killing
sentient and precious marine wildlife for no good reason and in the most cruel way.

Both catcher ships are equipped with several heavy steel harpoons. Once a harpoon is fired into
the whale, an explosive tip is triggered that is supposed to guarantee an instantaneous death of
the animal. A study, however, shows that some animals suffer as long as 15 minutes once they
have been harpooned.

“Most people in Iceland know that whales are hunted, but they don’t know how they’re being
hunted. I believe this practice should be monitored, documented, and made visible to the public.
Visual footage of whaling is indubitably hard to look at, but it is an essential but missing puzzle
piece in an honest debate about the future of whaling”, Feuerhahn continues.

It’s the first hunting season for Kristjan Loftsson’s whaling company Hvalur hf. since 2018. That
year, Icelandic whaling found itself in the international spotlight after footage emerged that
revealed the accidental killing of two rare hybrid whales (the crossbreed of blue and fin whales).

Earlier this year, the Icelandic Minister of Fisheries and Agriculture Svandís Svavarsdóttir publicly cast doubt on the renewal of whale hunting permits past 2023 – an announcement that was met with cautious optimism from conversation organisations and people around the world.